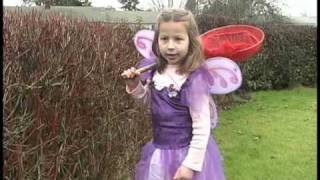 “The Fairy Scientist was one of 9 finalists in the annual Project Reason Video contest. Voting is now closed and our little scientist did not win any of the three grand prizes. Oh well, the Nobel is still up for grabs.

Children are natural scientists – filled with wonder and curiosity, they yearn to know about the world around them. Join Fairy Scientist, Lydia as she sets out to discover the secret world of Fairies.

Lydia comes from a family of accomplished scientists; her grandfather is a PhD Oceanographer with NOAA and her great-grandfather is professor emeritus of Horticulture at Oregon State University. Lydia’s father is an Electrical Engineer with Hewlett-Packard with numerous patents to his credit.

Scientist, Lydia, is the granddaughter of “Andrus” producer/director, Robert Neary. Though she took a little direction from her director grandfather, her comments and observations are completely unscripted and entirely her own. Lydia’s academic studies has her currently in the First Grade, but her inquisitiveness and curiosity show great promise in her achieving a notable scientific career.”

Posted by ict-design.org | Tom Johnson on November 26, 2012 in Technology